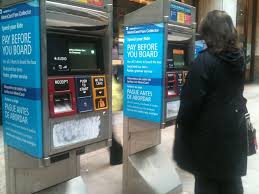 I was taking a day trip to New York City and was waiting to take a downtown bus from 42nd Street and 2nd Ave. I saw some ticket kiosks, but ignored them because I had a MetroCard load with sufficient fare.

I entered the front of the bus and saw that there was no way to pay. The driver said I needed to pay at the kiosk outside and so I got off the bus, paid and waited for the next bus. It arrived and I noticed that there was a slot to pay and told the driver, I just paid and he asked for the receipt? I said, "I didn't receive one" and then he told me to get on the bus.

It was surprising how fast I traveled one and a half miles downtown.  After exiting the bus I chatted with locals to share my experience that had taken me by surprise.

They said, things are always changing.   I was riding the Select Bus Service. It was created on some routes to reduce travel time and to increase the level of comfort. Well at least I experienced one of the two!

There is a happy ending to this story as I got to where I needed to go in time even though boarding a bus was a bit challenging.

In what instances have you been caught off guard traveling a familiar route?